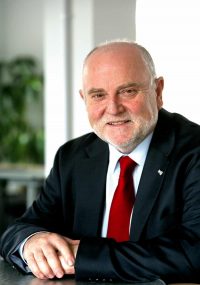 After studying at the Royal Academy of Music in London from 1968 -1971, John Smith joined the English National Opera orchestra in 1974 and remained there, as Principal Tuba, for almost 20 years.

In 1994 he was appointed a full-time official of the Musicians’ Union (MU) and was promoted to the post of Assistant General Secretary (Media) in 1997. In December 2002 John was elected General Secretary of the MU, a position that he held until July 2017 when he retired.

John has been the President of the International Federation of Musicians (FIM) since 2004. This role involves representing musicians’ interests in discussions with organisations such as UNESCO, the World Intellectual Property Organisation (WIPO) and the European Parliament and Commission.

John has held directorships of the British Copyright Council, UK Music, and the Educational Recording Agency. He is a former President of the General Federation of Trade Unions (GFTU) and has been a member of the TUC General Council and a member of the TUC Executive Committee.