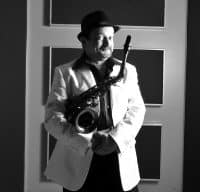 Sergio ‘Checko’ Dávila is a multi-instrumentalist composer, a graduate in saxophone and composition of the Conservatorio Castella.

Pioneer of the Latin Jazz in Costa Rica, former soloist of the American Youth Jazz Band of the state of Delaware with which he travelled giving concerts in several European countries. Perhaps the first Costa Rican to play at the prestigious Montreux Jazz Festival as a soloist in an American band. During his 9 years in the USA, he had musical groups of different genres (rock, salsa, Latin jazz, funk) and also playing with great bands and artists such as James Brown, Wilby Fletcher, etc.

He is currently a music producer, as well as the owner of SoloHits Recording & Mastering Studios, where a large amount of music production and mastering in the country takes place. With a career of 40 years in music, he has not stopped playing the saxophone and other instruments in his own and others recordings, and has more than 10 years working for the rights of the musicians of Costa Rica as vice president of AIE and president of the board of directors of the Union of Music Workers (UTM).