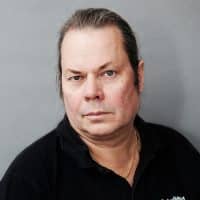 JAN GRANVIK, president of the 3,000-member Swedish musicians union since 2007, is also the chairman of the collecting society SAMI, representing 40,000 performers in Sweden. The former guitar player and studio producer had his own hard rock band in the ’80s, recording five albums with GLORY. Granvick was the first Swedish artist to make a direct record deal in Japan (JVC/Viktor). This was the starting point of his interest in the international music industry. Today, he is involved on the boards of Music Sweden and Copyswede (CMO), among others.